Popular Japanese jewelry, U-Treasure, is creating a line-up of rings inspired after one of Nintendo's beloved character, Kirby, along with friends found in the series and will be made available for consumers in Japan soon.

Each ring will feature Kirby and his friends (Kirby of the Stars), namely, Coo (bird), Kine (fish), and Rick (hamster).

There will be three variants for the ring in total, all of which bearing the exact same design. However, while two of the rings will have a similar price tag, one would be significantly different and far less.

The silver variant will sell for only 8,800 yen whereas the gold and pink gold versions will both sell for 39,600 yen. 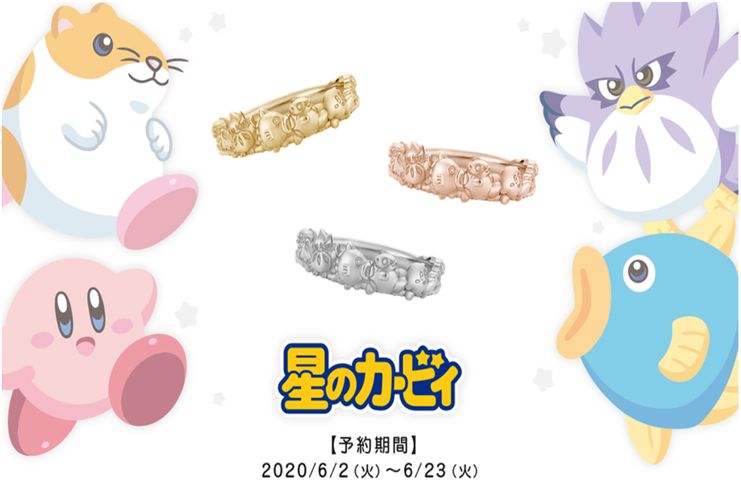 U-Treasure is currently taking pre-orders for the rings until June 23, 2020. Successful preorders made in the aforementioned timeframe can expect to receive the merchandise by October this year.

The U-Treasure Kirby and Friends rings are not just exclusive in Japan, however. International consumers who have an interest in the items may choose to preorder as well, at the expense of added shipping cost.

A Niche, But Big, Market

For example, one of U-Treasure's product is a Pokemon-themed engagement ring set in a master ball box. Which fans of the Pokemon franchise would attribute as a ‘guaranteed catch' at those which the Masterball is thrown. An insinuation of absolutely getting the oftentimes elusive ‘yes' during any wedding proposal.

But real Kirby fans need not to look elsewhere if they're also searching for the exact same ring, given an obvious purpose. U-Treasure also comes with a Fountain of Dreams-themed engagement ring that comes with a hefty price tag of $3000.

Collectible Items for Everybody

One need not also has to have marriage in mind to browse through U-Treasure's listings, however. As even the average aficionado can browse through it, too, and potentially scratch an itch on certain memorabilia items, ranging from different franchises.

Note that some of the merch in the site can be expensive, even for the local consumers. If you are an international buyer, price is something you should also pay careful attention to.

But it might as well be worth the investment for real hardcore fans, given the items’ exclusivity.